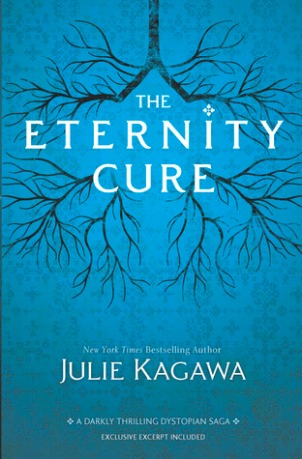 (6th Review for May)

I must say I loved the first book and had high expectations for the eternity cure but it didn’t quite reach the bar.

The plot was strong and very interesting I couldn’t fault it in anyway, and it thickened throughout the book.

But in saying that I just HATED that no-one died. We have people on their death beds several times and yet they survive. “Remarkable”. By the end I get my wish “about time someone died” Hmm no wrong again. Sigh.

I didn’t like the love story. It was bland or maybe I didn’t like Zeke he was so soft and girly, not a masculine bone in his body, he ran after Allie, like a little lap dog, I ended up skipping  all their “moments”.

Allison:  to be honest I preferred her as a human, she had more of a fight in her. As a vampire it seems that it didn’t just change her physically but it changed her personality too, I know that would be expected considering her transition, but it left me feeling unsure about her it was like a new character that wasn’t developed much. The only time I could see the true Allison was when Jackal was around, he just rubbed her up the wrong way. J

Jackal: O god did I love him, Jackal the King of raiders. What a character.  I would read a book entirely based on him. He was just so cool, every time he was in the book I would just get lost with him. His sense of humour, dry sarcasm was priceless. He was so disloyal an untrustworthy but he made me smile. JUST LOVED LOVED HIM.

Sarren: O Sarren, Sarren, Sarren, why won’t you just die already?. Every time  Sarren is caught  he escape,s he just won’t die and always gets away. “JUST DON’T CAPUTRE HIM” really it would make the story good, we will just hunt him and when we get him, and then we can unleash hell, not a few rounds of a sheep fighting off the wolf. So god-damn frustrating. What I did like about Sarren was his gift at torturing Kanin, it was cruel, vicious yet interesting.

Any way in saying all that I will still get the third book, but only for you Jackal. J