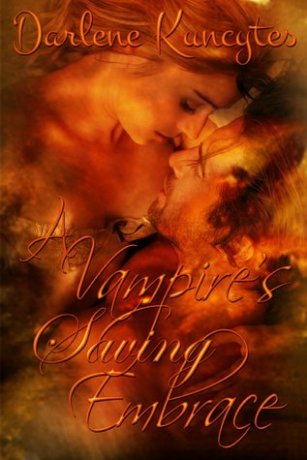 Review of A Vampire’s Saving Embrace

I was given this book by the author for an honest review.

When I first picked up this book I thought it would be a romance, but was very surprised to find a lot more went with It. This book reminds me of a mills and boon’s with a bit of action and adventure thrown in. The love story does take the front line and is very strong, at times piping hot.

Abby: Abby is the main character and at the start of the story she is strong, feisty and a likeable character. After been attacked by a demon, she is saved by a vampire called Desmond. He takes her to his home to protect her, and it all kicks off from there. Abby is attracted to Desmond straight away and also is enlightened about whom she really is, and also that so much more exists like vampires, werewolves, fey and witches. There is a lot of tug and war between Desmond and her but it just adds to the passion between them. The only thing I hated was she had two catch phrases that I felt like screaming every time I heard them, one was “Holly Hell” and the other was “Cripes”. If I hear does words again I will strangle her.

Desmond: Desmond is a man, a real man, a monster to the world, but a gentleman to Abby. He’s jealous, possessive doesn’t understand any emotions except anger and hate. So it’s cool to see him struggle with his new found emotions around Abby. He had a habit from the start of calling her “pet” which I also hated. But other than that he was yummy. J

Plot: at the start I was so confused thinking why did he rescue a stranger? Why was she living in his house? And why were werewolves and other vampires helping to protect her. Then it all made sense and I could hear myself saying “Ahhhhh, that’s why” and I fell into the story seeing there was a purpose of why her. As far as action goes (that is outside the bedroom) it comes near the end of the book in one full swoosh, but this didn’t bother me, like I said I really thought it was just a romance so it was a pleasant surprise.

Overall a very enjoyable read and one I would recommend for lovers of vampire romance.