It is close to the winter solstice when Maeve Lewin’s simple trip to Scotland to re-unite with her mother throws her headlong into a dangerous world.

A prophecy written centuries before seems to describe her as ‘the one’, and despite Maeve’s insistence that this couldn’t possibly be true, her mother and grandmother both agree.

What Maeve doesn’t know is that her boyfriend is part of her destiny, mentioned in the ancient text as ‘the one of noble birth who will stand by her side’. But Harold’s only plan is to join Maeve Scotland for the New Year before the two of them fly home to the States.

The night of the winter solstice brings Maeve face to face with a terrifying reality, but it’s Harold’s arrival that forces her to come to terms with the truth. He seems to have lived in this parallel world before and his part in future events has been sealed as surely as hers.

With dark forces hunting her relentlessly and confronted with a fate  she didn’t choose, Maeve must come to terms with her future and somehow find the strength to fulfill the perilous task set before her.

Where you can purchase this book?

Other Books by Nikki Broadwell 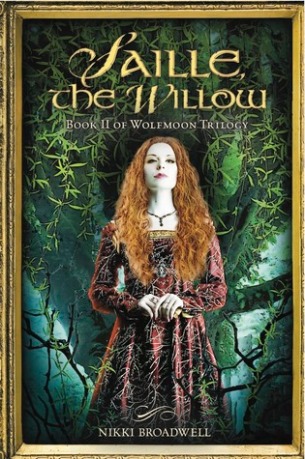 Where can I purchase these books?

Nikki’s college education centered on English and Art and she graduated with a B.A. in both. While her children were in middle school she began a greeting card business and then later, when they were out of the house, she began painting on silk, selling her scarves and wall hangings to high-end galleries in California and Oregon .Now she writes full time, working on a sequel to Wolfmoon as well as a fictionalized version of her parent’s life based on journals her father kept during his time as a POW duringWW2.

Having recently located from Portland Oregon, Nikki has become a resident of Tucson, Arizona where she lives on a hill at the base of the Catalina Mountains with her husband, and standard poodle, Buddha and Eesa, the cat.

REVIEW OF THE WOLF MOON

I was given this book for free by the author for my honest opinion:

This is the thrid book in the Wolf Moon Trilogy. I haven’t read book one (The Moonstone) or book two (Saille The Willow) but could easily pick up on book three with no problems.

I loved the detailed description of Scotland from the smell in the air, to the small white cottages, to the simplicity of their ways. Maeve being from a large city seemed to fall in love with their enchanting ways. it took a while for a detailed description of Maeve’s physical appearance to come through, but when it did she fitted the picture perfectly with her red curly hair and green eyes. Throughout the story we watch Maeve grow into an extraordinary woman with so much ability.

The outerworld was fascinating, now plunged into darkness by Brandubh the evil priest, Maeve is the only one who can save it as the prophecy was told a long time ago, the outworld is fuelled with magic, creatures and animals with abilities to communicate, trees that have souls and plants that can heal.

Harold who is  Maeve’s boyfriend play’s a huge role in the outerworld, suprising them both the second chance he is given causes a new love to bloom between them that is beautiful to watch.

Over all a very well written story that was very enjoyable. I loved the Gaeltacht in the story as it’s my countries language. Nikki Broadwell made it sound magical. 🙂

So go raibh míle maith agat for such a magical story.