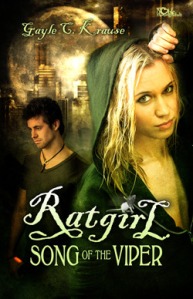 Sixteen-year-old streetwise orphan, Jax Stone is an expert at surviving in a dangerous city, where rats rival the homeless for food and shelter, but she’s an amateur at fighting the immoral mayor when he kidnaps her little brother. Desperation demands she quickly master the role of courageous opponent. She uses her hypnotic singing voice to lead rats to their death, and all the children to safety, in a dying city cursed by the deadly sun.

Gayle C. Krause – writes rhyming picture books, middle grade and young adult novels/short stories. Her award nominated YA novel, Ratgirl: Song of the Viper is now available on Kindle and in paperback, (Trowbridge Books) and her picture book, Rock Star Santa (Scholastic) was an original book club selection. She also has short stories, The Storyteller’s Daughter in Timeless – YA Historical Romance Anthology (Pugalicious Press) and Two Best Friends (Chicken Soup for the Kid’s Soul II). Her poems have been published in And the Crowd Goes Wild: A Global Gathering of Sports Poems for Children and Meanderings; A Collection of Poetic Verse and various children’s magazines. Visit her at http://www.gayleckrause.com and http://thestorytellersscroll.blogspot.com

Jax is the heroine of this story and I just loved her.

Ratgirl is set in a dystopia world, a world where no one goes out in the day, due to the severity of the heat. It would literally kill you. So at night time the underground city comes alive. Ratgirl reminded me of the Hunger games in ways as Jax scavenges abandoned homes for items of value, and sells them on the black market to keep her friends and family fed. Her ability to sneak around is great. For Jax is what pushes her so far is family and friends. But when Jax’s brother is taken she doesn’t crumble, she fights. But her fight gets more complicated when the magnitude of the situation is discovered and with a city infested with rats well it adds to the mix.

The idea of competing with rats for food had my skin crawling. I hate rats. Yet I was intrigued to understand what the rats had to do with anything, and then Jax sang.

This story has it all fight for survival, action and we get to meet some amazing characters. Colt being one of my favourite. J

This story doesn’t give up for a moment and the plot was very well written. I truly enjoyed it and I would recommend Ratgirl to all lovers of stories like the Hunger Games.